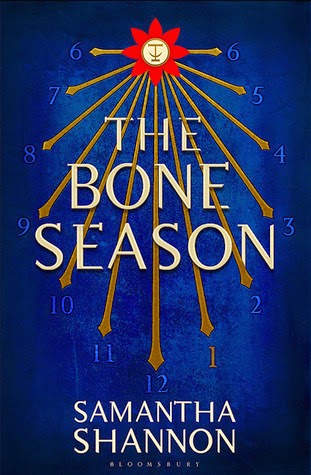 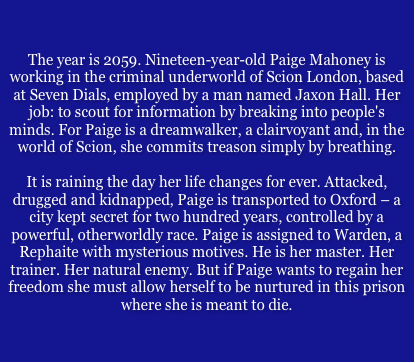 I was not expecting to like this book as much as I did! I knew that this book was acclaimed by many but on the other hand I was not aware of all the hype so I went in with pretty low expectations and was wonderfully surprised by it.

This is a fantasy book so the world it was set in played a big role in the plot. And wow was it one complex yet magical world! It took me a while to be able to imagine this new London because of how quickly we're thrust into it but slowly a vivid image of a place ruled by fear was created in my mind. A world in which there are clairvoyants- basically people have these superpowers (which I really want!) from being able to see dreamscapes to being able to put images into anyone's mind. The new world Samantha Shannon creates makes me want to take a step back and marvel at it like I would with an enrapturing art piece. When it comes to people with supernatural powers I always have this romanticised idea of heroism but in this world to even have an ability is to break the rules.

That's why our main character, Paige, works for Jaxon Hall- and let me just say he speaks in the most comical way! One of his eccentric lines:"You've bloomed like the ambrosial flower you are, my winsome wunderkind." I've never heard anyone called a winsome wunderkind before and sometimes his silly nicknames add a touch of humour to such a dark story.

We learn a lot about the people she works with in the criminal underworld. I loved learning about Nick and their friendship! Paige admires Nick and thinks of him almost as a prince and so do I. There is such a diverse range of characters in this book that you're bound to love getting to know them. In fact, the main character, Paige Mahoney, is such a strong and relatable and brave and admirable (( could add a million more ands!) protagonist. She breaks rules to help those in need, she feels an endless amount of sympathy even for those she hardly knows and she sure knows how to take care of herself. If I was in her situation I have no idea what I would do! There are always those protagonists that make you want to scream, "What are you doing?" or protagonists who you feel no connection to but I understood all of Paige's decisions, even if her bravery sometimes bordered on reckless (doesn't it always?;)).

The plot moves right from the start. Which results in a bit of info-dumping... I personally didn't mind it too much because I was eagerly trying to grab every little sentence or word that could help me picture this shattered and sparkling fantasy world. But I know that info-dumping can be annoying because we like for the world to be slowly unravelled in front of our eyes rather than to be told exactly what's happening but in a way it helped set up this very complex world so that we could move forward into the many twists and turns and new settings of this story.

I love a good romance because Love is a place of concentrated, explosive and beautiful feelings. In this book, as much as I really, really like the romance and root for the two characters (who shall remain nameless in this review... except for the fact that as soon as you read the book it's pretty obvious who the love interest is going to be because as soon as a guy is described as "beautiful and terrible" there's a 99% chance he's the one;)) to be together, I wish there were more sparks between them. Throughout the story you can feel the characters trying to learn more about each other and learn that they're fighting for the same things. But I feel like maybe there should be more chemistry between them- I wanted more moments of just them- getting to know the small, light-hearted things about the other. I wanted to feel Paige fall in love slowly with him- I wanted a moment before the kiss with the realisation of her raw and powerful feelings. However there is this electrifying and magnetic kiss that bubbles with chemistry- and it's spontaneous too!

But I love when love (or blooming love) results in the characters becoming their better selves:) And this is definitely true for the romance in this book - they make each other strong and I love them together. Plus there is so much action and character development that love couldn't take centre stage yet so I think the author played out the romance beautifully between two lovely, conflicted, selfless and brave characters.

Overall, I definitely recommend this book to anyone and everyone! This story has an oppressive governing system, CLAIRVOYANCE (oooh dreamwalkers and gangs!) a heroine we can all love and respect, a romance built on trust, tons of characters that have been developed marvellously and tons of characters that are aching to be developed in the next book (which I have heard the best things about).

(The ranking is the same as with school grades because school has pretty much taken over my life so why not?;))

Thanks for reading! Have you read The Bone Season or anything like it?:)