Me: I’ve never met anyone like you before and I think I… love you-
Station Eleven: I know;) 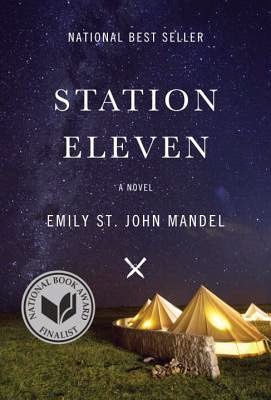 The beyond gorgeous cover! (Source: goodreads) 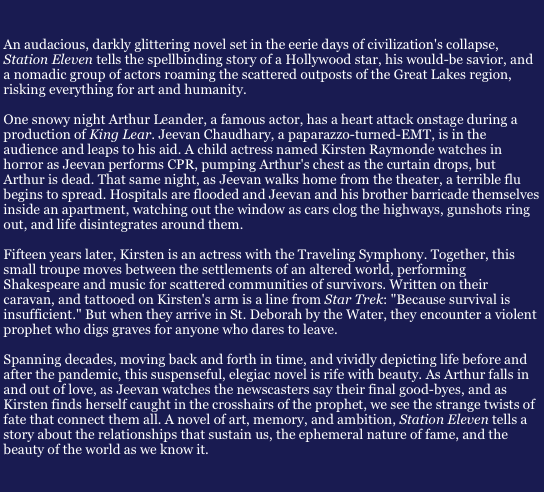 Station Eleven shocked me in the best possible way. As in it reached a whole new level of beautiful! If I had to choose just one word to describe it (which is quite the challenge) I would say magical because I felt like I had fallen into this “darkly glittering” fictional universe, I felt like all the emotions the author described took me over and I felt absorbed in the subtly yet perfectly woven storylines. I mean it’s a post-apocalyptic book that zooms in on the importance of art, friendship, heartbreak and hope.

Every character managed to shoot an arrow straight through my heart because I loved reading all of their perspectives. There is something enchantingly special about the unique way each of them sees the world. They each had a quirky passion that defined them or had a little anecdote which opened my eyes to why they feel lonely, jealous, in love or simply happy. Even with the story somehow gracefully jumping to and from different time periods, all the characters were connected in an unforced manner and had strong, relatable feelings which showed me the transcendent nature of emotion— so many Shakespeare-lovers highlight that as one of the main strengths of his work which is, funny enough, totally relevant to this novel which happens to feature some of his plays! In fact the only thing I would change a teeny bit is to incorporate more elements from Shakespeare's plays-- maybe so that some plot lines or characters of his are reflected in the book.

The story features a few timelines which helped me put the pieces of little mysteries we’re given along the way together and I felt like Sherlock (before I realised that he’s way cooler than I ever can be) whenever I had hunches about how some plots in the past would lead to events in the future.

We get to explore the famous actor Arthur Leander’s life before his tragic death which starts the novel. The novel starts with a performance of King Lear, in which Arthur plays the titular character.

“The interior of the theater was darkened now, the posters still advertising King Lear, with Arthur gazing up into blue light with flowers in his hair and the dead Cordelia limp in his arms.”

He, in a way, is the main link because he seems to have made quite an impact on the majority of the characters. I loved, loved, loved learning about his life as an actor and the struggles that came with it. There was something so poetic, gentle yet frustrating about him that intrigued me. Also, being a hopeless romantic, I couldn’t help giddily enjoying learning about his love life— he is, at one point, a celebrity and so it’s like reading a romantic, heartbreaking and conflicted portrayal of celebrity gossip! Another thing that made this book brilliant was that the large span of time allowed Emily St John Mandel to explore the character developments in detail: we watch them bloom or rot (to be dramatic:P) and this is great because, I think, we get to see why the characters turn out the way they do in their endings.

Kirsten is the girl with the tattoo that I now feel tempted to get: “because survival is insufficient.” Her character lets us hang around and explore the post-apocalyptic world— a post-apocalyptic world with a Travelling Symphony that is! That’s right!- she is part of a performance group that travels (as suggested by their name) to many places and plays soul-stirring music and performs Shakespeare to audiences, no matter how small or big, in order to keep hope and art alive. After reading this I almost felt like joining a performance group myself, then I remembered I can’t act:( A lot more action takes place in Kirsten’s storylines because of the crazy Prophet that happens to jump into her story. At first I thought I may not like the storyline with the Prophet when I read about it in the blurb but all the emotions that bubbled within the characters made it special and haunting.

In the future, I loved seeing the startlingly different ways the characters coped with the loss of everything they knew before: some clung onto the past, some went insane, some constantly searched for the brighter things. And in the past I loved seeing how passionate Miranda was about art, how nostalgic Clark and Arthur were, how conflicted Jeevan was and how innocent Kirsten was. So many characters with their jumble of decisions and hopes.

Even the descriptions went beyond my expectations! Sometimes action carries the plot forward while description is just there— but no, not in this book! The smallest things like a paperweight or old letters become something new and beautiful. And i’ve just got to mention the dog, who looks like a “marshmallow,” because as someone who has a lovely puppy, I couldn’t help but laugh at the descriptions of Luli, the dog, staring longingly at strawberries after being exiled from a dinner party for trying to steal food.
Here’s an example of one short but elegant description:

“The ships were lit up to prevent collisions in the dark, and when she looked out at them she felt stranded, the blaze of light on the horizon both filled with mystery and impossibly distant, a fairy-tale kingdom.”

When you find out what Station Eleven is, I think you’ll be shocked and delighted. The descriptions of whatever it is were so easy to imagine and fall into.

One of my absolute favourite quotes from the book:

“No more Internet. No more social media, no more scrolling through litanies of dreams and nervous hopes and photographs of lunches, cries for help and expressions of contentment and relationship-status updates with heart icons whole or broken, plans to meet up later, pleas, complaints, desires, pictures of babies dressed as bears or peppers for Halloween. No more reading and commenting on the lives of others, and in so doing, feeling slightly less alone in the room."

Email ThisBlogThis!Share to TwitterShare to FacebookShare to Pinterest
Location: Singapore